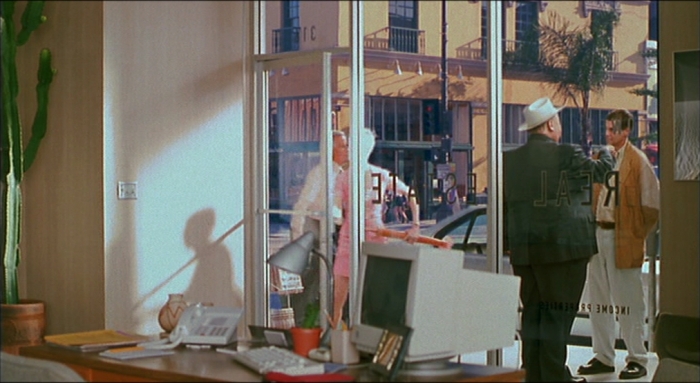 Perhaps more so than any other director, Hitchcock taught us a lot about repetition. Neurosis and repetition, obsession and repetition, passion and repetition. Repetition as the hope for resolution, only to have that rationalisation develop into yet another manifestation of the crippling problem. To repeat is to attach oneself to the one affect, to enter into a union with a single pattern of being and feeling, to act out its various consequences no matter how the one may contradict the others. When haunted by a dream, a feeling, an anxiety – to reproduce it at whatever cost.

What does this tell us about our own times? What are we all so obsessed with? There is something we have yet to overcome, and there is something coming which we are not quite ready to face, and so those of us who are creators mine the past for clues to resolution: the fin de siècle cliché thus. In doing so, some of these ‘artists’ enjoy the opportunity of making a little money, exploiting the fact that there is a joy in repetition, there is a pleasure in recognising and reli(e)ving, there is a glee in reviving past associations from our present, more worldly position. We speak of the Star Wars ‘generation’ a group of people defined by a film – a demographic. You can’t go wrong when you appeal to the lowest common denominator.

And thus we turn to Hitchcock, the filmmakers’ filmmaker. I’ve often joked that if there was any Hitchcock film worth remaking shot for shot, it’s Rope. Both because of its brave montage and because it’s got Hitchcock written all over it – because any remake would be futile. Rope is not the story of the Leopold-Loeb murder, it’s a piece of Hitchcock experimentation. Remaking Rope would not entail retelling the story but reproducing Hitchcock: shot for shot, word for word, titles and score and all.

Gus van Sant makes this comment through his Psycho. His film is a re-make of Hitchcock’s. And the only way to repeat what is so very Hitchcock about Hitchcock is to repeat Hitchcock. To reflect Hitchcock’s cameo in a store window, but to insert the name Gus van Sant at the appropriate position in Saul Bass’ famous crisscrossing lines.

The result is that in a film essentially about the debilitating effects of an obsessional repetition, the viewer is left looking for differences. And we find them. Nevertheless, we expect them to be ‘more Hitchcock than Hitchcock’ – we expect this not to be van Sant’s film but somehow an improvement on Hitchcock. For starters it’s in colour, and every colour screams for attention. The hotel and the office of the opening scenes are decorated in sombre tones, but Marion wears orange underwear and her suit is pink. The Bates Motel is appropriately dark and dank, but Marion wears silks of green and blue. The contrasts culminate in the red and white of the shower scene, displaced by the plastic geometrics of the curtain. “I’m making this in colour,” yells van Sant at every opportunity. Did Hitchcock need colour? Psycho was made in 1959 yet Hitchcock deliberately chose the stark contrast of black and white.

But is this enough? To pay homage to a great director by emulating? – this is what remakes do. What van Sant achieves is to force the viewer into looking for differences within a field of repetition, where other remakes have us desperately looking for similarities and elbowing our friends in the darkened cinema when we recognise the ever so oblique references, so very proud of our sharpness. And more than anything, this is what our age of creative retrogression needs.