Please note that I can’t meet, work nor transit through spaces with long-tube fluorescent lights.

Because the impacts on my brain are experienced at the extreme end of those extents, this manifests as a disability similar to epilepsy but sitting in fact on the migraine spectrum. Exposure to fluorescent lights – and most particularly, older long-tube fluorescent lights with magnetic or electromagnetic ballasts – interferes with the functioning of my brain to such an extent that it causes me some mixture of pain, confusion, impairment of judgement, impairment of vision, impairment of speech, momentary loss of consciousness, petit mal seizure, and ultimately, migraine which can last for days.

Avoiding long-tube fluorescent lights means I can’t catch public transport at night, or trains that go through tunnels, or go to supermarkets or convenience stores. It means checking ahead whenever I visit any new place, for every meeting, every show, every venue, every hotel, every airport, every restaurant, every bar, every café, every social engagement, every home, every chore.

Not surprisingly, I am asked about this a lot. So here’s a table comparing brain waves with fluorescent light frequencies:

For me, the impact is to the brain, not the eyes: as you can see from the table, there’s an overlap between brainwave frequencies and the frequencies at which fluoros operate, especially the older ones. The impact is not about the brightness of their light, it’s about how these tubes produce light. And when fluorescents are switched on, the erratic blast they emit in the seconds it takes to reach their optimal frequency has a massive impact on my brain – like being exposed to them for over an hour. While fluoros are to be found pretty much everywhere, they’re now being replaced with LEDs more and more rapidly, and this is having an enormous impact on my mobility, especially around overseas mass transit systems which I have only just started to be able to use.

Of course, all of this can be hard to explain and hard to understand. Astoundingly, even in today’s more understanding world when it comes to disability, there’ve been some real corker responses to accessibility enquiries. My former EA, the amazing Joanna Gould, has also heard it all – as, sadly, has the fabulous Adelaide Fisher, Regional Arts Victoria’s former Executive Assistant & Memberships Coordinator. We have a particular example of the head of a cultural institution whose response has become the stuff of case studies: he refused to make accessibility modifications, refused to meet me elsewhere, and then on being told it wouldn’t be possible to meet under those circumstances, told Joanna that he’d keep the appointment in his calendar “and if Esther wants to turn up, she can.” Needless to say, I won’t ever be meeting with that character. (We have been kind enough to omit his name and the name of his organisation.) Joanna used to exclaim: “If you were in a wheelchair, would they expect you to bring your own ramp?!?” Even organisations who have known me for a decade and more forget about access far too often – not just about my requirements, but the need to have some kind of procedure for asking for and then actually recording and acting upon accessibility needs. I do my best to remain patient, but far too often, it’s deeply disappointing and humiliating to have clear accessibility requirements ignored, or worse, to turn up to a meeting and find that the space is inaccessible, despite all the clarity at our end and confirmations at theirs. 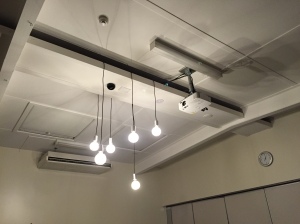 At the Colac-Otway Performing Arts and Cultural Centre (or just plain COPACC to locals) on 29 June 2016, I experienced the most superb level of accessibility modification in my experience. Not only had light switches been covered ahead of our arrival, and not only did the venue staffer brief us on access and egress including toilets, but even more amazingly, the room we’d booked had the most delightful improvised lighting I’d ever seen (pictured left). A simple and very cost-effective approach that not only made the space accessible, it made us all feel welcome.

Everyone’s brain is different. Whenever I’ve changed jobs and had lighting modifications undertaken (it’s so easy now – you just replace them with LED tubes), colleagues have remarked how much more comfortable they are, how many fewer headaches they go home with, how much clearer their eyes feel. Consider also that the operation of fluorescent lights in trams and trains is further disrupted by the irregularity of power through overhead contacts, affecting the brain in unexpected ways. Fluorescent lights have been associated with sleep disorders, immune deficiency, depression, hormonal imbalance, anxiety and stress. Whenever you’re in a situation where you can control the lighting in which you’re working, reading, thinking, moving or playing, do it: find what works best for you.

IMAGE: Older, large-diameter fluorescent tubes with magnetic ballasts. These are usually fitted in pairs in an attempt to minimise the effect of the flicker on the brain by complementing the frequencies. Attribution: “Fluorescent lamps artistic” by Flickr user Oimax. Image reviewed on 20 May 2007 by the FlickreviewR robot and was confirmed to be licensed under the terms of the cc-by-2.0. – Flickr. Licensed under CC BY 2.0 via Wikimedia Commons.