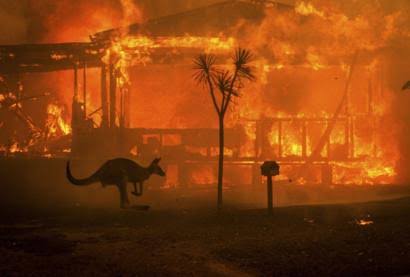 As each passing moment reveals further devastation suffered across our communities, there’s been a lot of criticism of the prime minister’s behaviour towards grieving people and working firies, and a lot of calls for him to show leadership at this catastrophic time.

But aren’t we bring unfair in expecting too much of Scott Morrison? Aren’t we being unrealistic in expecting his leadership to adapt beyond his capacities and without assistance?

I’d like to ask something else of Mr Morrison: Please, go home, leave this difficult work to the experts, and ask for help on how to deal with the climate emergency. Seek out and follow the very best advice on long-term solutions for Australia. Because that’s what the job of prime minister demands.

There are a lot of ways that you can ask for help. Australia’s expert fire chiefs are an important start. They were good enough to come together months ago and write to you requesting a meeting – a letter which predicted the current disaster. Even now, it’s not too late to listen.

There have also been helpful pieces written by your Young Liberals colleagues, by former Liberal prime ministers and opposition leaders, and also by Australia’s finest journalists, writers and community leaders, as well as the world’s media. The entire nation has been moved to respond and motivated into action – and the world is watching.

Alongside these criticisms of the prime minister, there have also been widespread calls for his resignation – but what would that achieve? What would be learned by the prime minister, his party or the parliament if we pretend that this situation could be solved simply by starting anew with someone else? How many prime ministers does a burning nation need?

The climate emergency demands a long-term response. This means committing long-term to our political leadership.

Barring a double dissolution, Australia’s next federal election cannot be held before August 2021 at the earliest and May 2022 at the latest. We need to support Mr Morrison to serve out his obligations until that time.

Leadership is not a game, a culture war or a marketing exercise. The last thing our national approach to our most urgent challenges needs is to succumb yet again to its revolving door.

This means, as a nation, making it ok for Mr Morrison to ask for help from First Nations Elders, emergency services chiefs, climate scientists, psychologists, policy makers and community leaders. We need our media to respond positively to those calls for help, rather than attacking or ridiculing. We can’t have a prime minister who’s too scared and broken to seek help rather than keep attempting to save face. The decisions he makes affect us all.

Asking for help is a show of confidence and strength. It is a weak leader who stumbles on, babbling or lying or walking away in vain attempts to save face. In the language of Mr Morrison’s faith: we need a public redemption. We need to see him learn from his missteps, and then commit honestly and meaningfully to real change. We need to see this happen, publicly, to restore our confidence in responsible government.

Responding to people with honesty and real empathy; ending the lies to local and global media on Australia’s capacity to meet emissions reduction targets; working with policy experts and the entire parliament on an actual climate policy; committing to its long-term effectiveness – this is what it will take. Listening and learning with care and respect. This could be a transformative time for Mr Morrison, for the office of prime minister, and for Australia’s future.

At this volatile time, we need to support Mr Morrison to rise to the full range of challenges that face Australian prime ministers in the 2020s. Only in this way can we hope to survive those challenges, and then, flourish together in a new era of responsible leadership.

IMAGE: Matthew Abbott for the New York Times and BBC